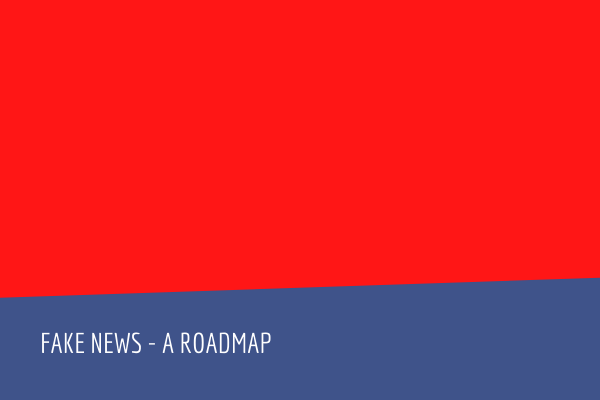 In the summer of 2017 a group of students on the Strategic Communications Masters at King’s College London decided to bring some clarity to the discussion of Fake News. Their concern was that what separated truth from untruth had for too long been obscured—made ever less intelligible by certain people intent on distorting responsible debate, while others simply fail to do their research.

The term Fake News has become the default catchphrase for truth-seekers wishing to label inaccurate reporting, truth-obscurers spreading malevolent assertions, or the unprepared who simply want to close down uncomfortable discussion. The shorthand expression ‘Fake News’ may fit neatly into tweeted messages, but willing amplifiers have spread it across all media, traditional and social, without necessarily giving it a meaningful definition.

Fake News: A Roadmap explores the character, consequences, and challenges of fake news. The twists and turns that connect fake news to related buzzwords and themes including ‘post-truth’, ‘populism’, and ‘trust’, are far from straightforward.

This book uses the image of a map to navigate the complexity of localised events, mounting pressures, and seismic shifts in the political and media landscapes that appear to have converged in recent years.

Much of the discussion surrounding fake news has made great play of ‘populist’ political victories. In Route 1, we attempt to disentangle these concepts. In Route 2, we consider ‘fake news’ and ‘post-truth’ as part of a historical trajectory in order to understand what is at stake in the way these concepts are used today. Route 3 explores age-old debates concerning truth, proof, and evidence. Next we ask: should leaders lie? Sometimes, according to Route 4. Have changes in the media landscape, the topic of Route 5, made information sharing more democratic? Not quite. But changes in the media environment have perhaps been a contributing factor to perceived lower levels of trust. Route 6 discusses the relationship between this decline in trust and the growing appeal of fake news. In the next three Routes we widen our gaze beyond democratic Europe and the United States to pseudo-democracies and authoritarian regimes: while Routes 7 and 8 consider the role of truth in Daesh and North Korean strategic communications, Route 9 offers insights into the Russian perspective on disinformation. In conclusion, Route 10 considers measures to counter fake news, and questions assumptions often taken for granted in these discussions. Who gets to judge truth and decide what we should believe? And who, if anyone, can make us change our minds? We conclude with some signposts for our readers to consider. Should we respond to the challenge of fake news, and if so how should we go about it?